"Jovianus Pontanus, in his tenth book, and thirteenth chapter de rebus coelestibus, discourseth to this purpose at large, Ex atra bile varii generantur morbi, &c., "many diseases proceed from black choler" "as it shall be hot or cold; and though it be cold in its own nature, yet it is apt to be heated, as water may be made to boil, and burn as bad as fire; or made cold as ice: and thence proceed such variety of symptoms, some mad, some solitary, some laugh, some rage," &c. The cause of all which intemperance he will have chiefly and primarily proceed from the heavens, "from the position of Mars, Saturn, and Mercury." His aphorisms be these, "Mercury in any geniture, if he shall be found in Virgo, or Pisces his opposite sign, and that in the horoscope, irradiated by those quartile aspects of Saturn or Mars, the child shall be mad or melancholy." Again, "He that shall have Saturn and Mars, the one culminating, the other in the fourth house, when he shall be born, shall be melancholy, of which he shall be cured in time, if Mercury behold them. If the moon be in conjunction or opposition at the birth time with the sun, Saturn or Mars, or in a quartile aspect with them," (e malo coeli loco, Leovitius adds,) "many diseases are signified, especially the head and brain is like to be misaffected with pernicious humours, to be melancholy, lunatic, or mad," Cardan adds, quarta luna natos (2), eclipses, earthquakes. Garcaeus and Leovitius will have the chief judgment to be taken from the lord of the geniture, or where there is an aspect between the moon and Mercury, and neither behold the horoscope, or Saturn and Mars shall be lord of the present conjunction or opposition in Sagittarius or Pisces, of the sun or moon, such persons are commonly epileptic, dote, demoniacal, melancholy: but see more of these aphorisms in the above-named Pontanus. Garcaeus, cap. 23. de Jud. genitur. Schoner. lib. 1. cap. 8, which he hath gathered out of Ptolemy, Albubater, and some other Arabians, Junctine, Ranzovius, Lindhout, Origen, &c. But these men you will reject peradventure, as astrologers, and therefore partial judges; then hear the testimony of physicians, Galenists themselves. Carto confesseth the influence of stars to have a great hand to this peculiar disease, so doth Jason Pratensis, Lonicerius praefat. de Apoplexia, Ficinus, Fernelius, &c. P. Cnemander acknowledgeth the stars an universal cause, the particular from parents, and the use of the six non-natural things. Baptista Port. mag. l. 1. c. 10, 12, 15, will have them causes to every particular individium. Instances and examples, to evince the truth of those aphorisms, are common amongst those astrologian treatises. Cardan, in his thirty-seventh geniture, gives instance in Matth. Bolognius. Camerar. hor. natalit. centur. 7. genit. 6. et 7. of Daniel Gare, and others; but see Garcaeus, cap. 33. Luc. Gauricus, Tract. 6. de Azemenis, &c. 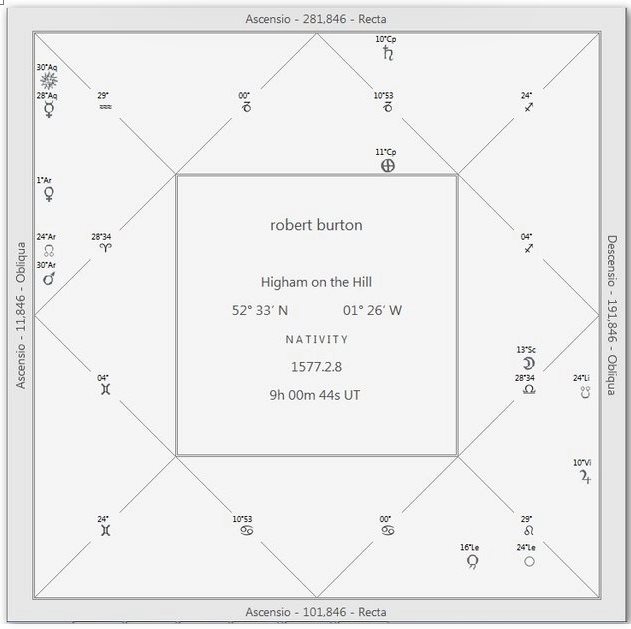 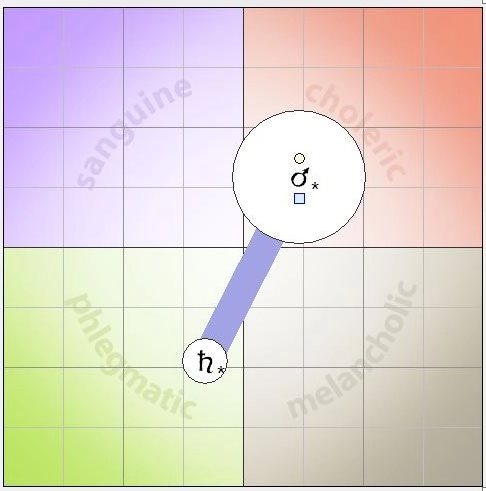 The time of this melancholy is, when the significators of any geniture are directed according to art, as the hor: moon, hylech, &c. to the hostile beams or terms of &♄ and ♂ especially, or any fixed star of their nature, or if &♄ by his revolution or transitus, shall offend any of those radical promissors in the geniture".

All charts are cast by Phasis, Traditional Astrology Software.

(1) Copyrights: The Anatomy of Melancholy from Project Gutenberg. Public domain.

(2) Born on the 4th day of the New Moon: people whose birth is unlucky