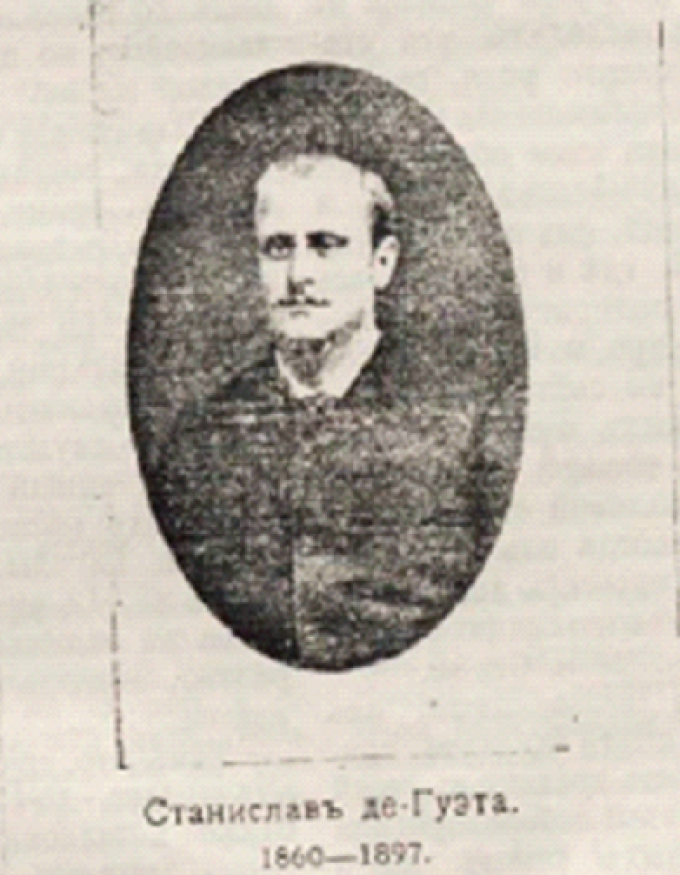 In the person of Stanislas de Guaita, who died on December 19, 1897, whose portrait we are placing here, the occultists suffered an irreplaceable loss.

The name of this outstanding Kabbalist, poet and thinker will forever remain on the pages of the history of Hermetic sciences, and his works will never lose their value and significance.

In order to give a more or less complete picture of this deep, complex and diverse character, a whole volume would be required; Unfortunately, the narrow scope of a brief biography forces us to confine ourselves to reporting only the most essential information.

Stanislas de Guaita was born in I860, he comes from an old Italian clan who for a long time moved to Lorraine. Having completed his education, first at the Nancy Lyceum, and then in Paris, he settled in the world capital, where his brilliant literary and esoteric career began, which began in 1881 with the publication of a small collection of beautiful and sonorous poems ("Oiseaux de passage") , and suddenly his career was interrupted by an implacable death, at the very time when he was preparing to enrich the occult literature with the third volume of his capital work - "Le Serpent de la Genèse".

Free and independent, he lived in solitude, almost completely almost completely reclusive life, spending most of his time in his chemical-alchemical laboratory or among the countless volumes of his amazing library. Here, from floor to ceiling, there were endless rows of rare books and manuscripts, with ex libris of several generations of occultists, with coats of arms, autographs, seals, all in magnificent binders, for Guaita was not only a thinker, but also an expert among bibliophiles. However, one should not think that Guaita is a cabinet scientist and a Kabbalist theorist. Few of the occultists of the West have gone as far as he took the dangerous path of practical magic, and therefore it can be safely said that if he owed enormous erudition to his library, he gained his knowledge on his own and only thanks to tireless energy and courage bordering on recklessness.

But in addition to the personal qualities, knowledge and talents that sharply distinguished him among the modern occultists, Guaita forever became famous by reviving the ancient Kabbalistic Order of the Rose + Cross, the Great Master of which he was until the last days of his outstanding, but too short-lived life.

To those who, after reading the works of Stanislas de Guaita, would like to get to know the author’s personality more closely, we can advise to turn to the following sources: