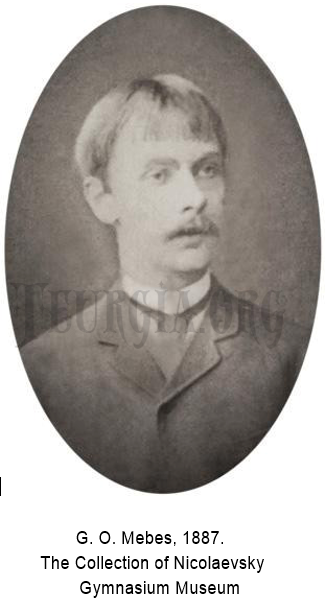 On the night of April 16-17, 1926, 93 years ago, the Joint State Political Directorate (JSPD) searched the apartments of the most active figures in occult lodges in Leningrad.

The catch of chekists was startling: a huge number of books, Masonic tokens, swords, court swords, cloaks, cordons and other items of Masonic ritual, which were immediately seized. The situation was more complicated with the Masonic altar and the prayer room found in the apartment of G. O. Mebesi, which it was decided to leave under the protection of the owner. After that, the JSPD repeatedly began to call in the Leningrad occultists for questioning. However, only B. V. Astromovii, who played a fatal role in the history of the St. Petersburg's occult communities, was kept under arrest. Other occultists only got a recognizance not to leave.

Receipt: "I undertake to preserve without transferring to someone else for possession all the objects that belong to the prayer room in my apartment, as well as the pentagram made of an alloy in the form of a five-pointed star with a cross inside and a ruby on top that belongs to me. I undertake to present all this to the Soviet authorities upon first request. The tenant of the apartment 5 of the house 3/13 on 5th Sovetskaya St. - G. Mebes, 17 of April 1926." *p. 408-409 back-page+. All the present signed a recognizance not to leave.v 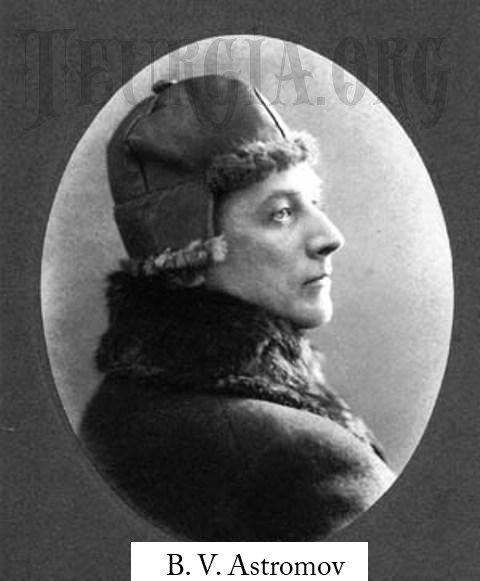 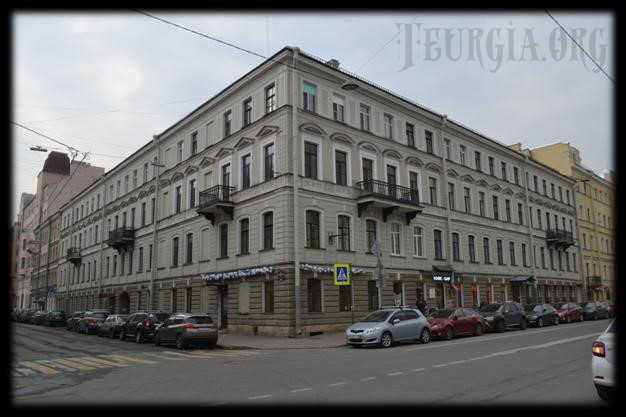 The modern look of the building: corner of 5th Sovetskaya St. and Grechesky avenue, 3/13. Photo: Melius. 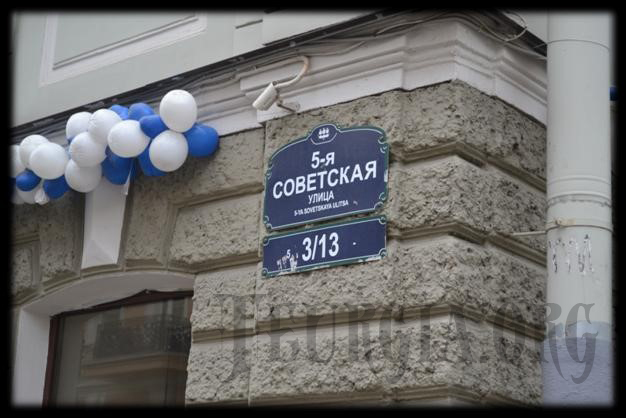 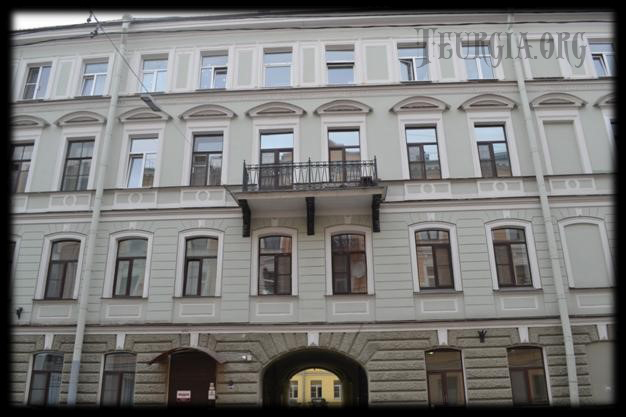 G. O. Mebes' apartment was located in the entrance from the 5th Sovetskaya St.
The entrance to the left of the arch. Photo: Melius. 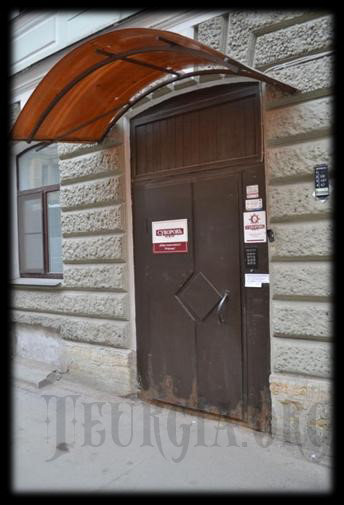 The entrance. The hotel "Suvorov"
is an orienting pointvi. Photo: Melius. 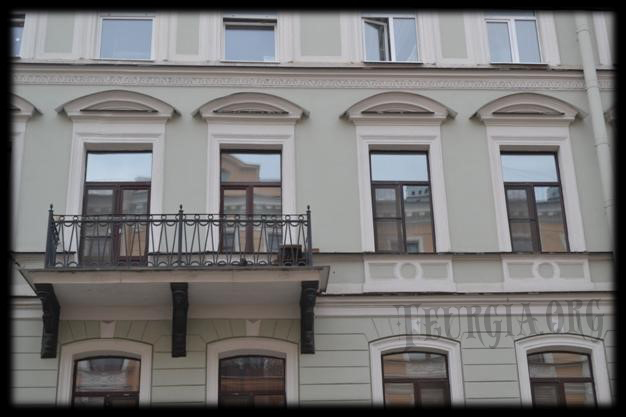 Above the arch on the third floor there is a three-room apartment with a wide balcony.
Photo: Melius 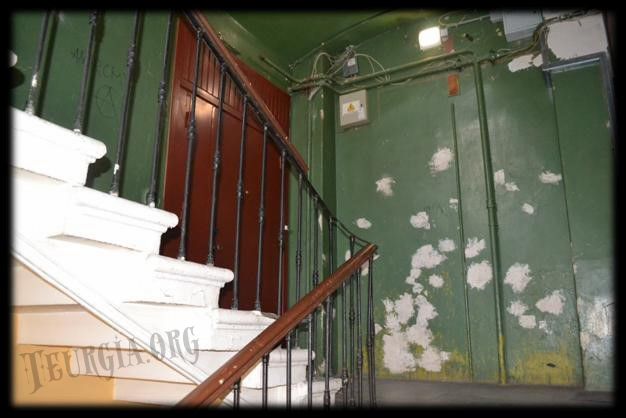 The entrance is clean and renovated, but only to the third floor, where you can see a harsh contrast near the 5th apartment.
Photo: Melius. 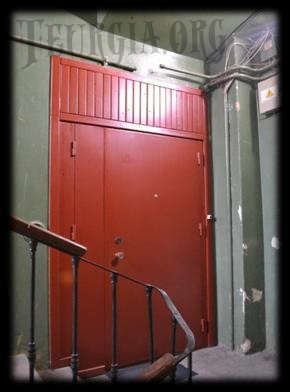 Now there is a modern metal door without a number, however, front doors of other apartments
have numbers. 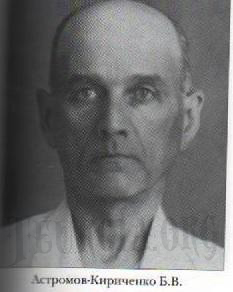 According to the next-door neighbors, residing in the communal apartment, it became known that the three-room apartment 5 is owned by a dumb woman who has been living here for many years. She avoids any contact with outsiders and leads a very closed lifestyle, especially, as was said, because of the criminal incident that took place in this apartment (the criminal incident was not specified). As it turned out, the neighbors don't know the history of this apartment.

According to the questioning report of G. O. Mebes and other figures involved in the sensational “Cases of the Leningrad Masons of 1926” of the JSPD, since 1918 there were meetings of Martinists in this apartment, Mebes continued to read his Course on the Occult Encyclopedia, lectures on the book of Zogar (part of Kabbalah), and his wife, Maria Nesterova, read lectures on the history of religion. In addition to purely theoretical studies, practical work was also done to develop the abilities for telepathy and psychometry.

After the search on April 16, 1926 and the seizure of Masonic attributes, G. O. Mebes was questioned on April 28, 1926. By the resolution of the SC JSPD dated June 18, 1926, Mebes was sentenced to imprisonment in a concentration camp (Solovki) for a term of three years "for detention in criminal regime", where he was sent with the first stage together with B. V. Astromov-Kirichenko, V. F. Gredinger, S. D. Larionov and A. V. Klimenko *p. 752+. By the resolution of the JSPD dated December 23, 1927, under the amnesty, the sentence was reduced by 1/4. By the resolution of the SC JSPD dated August 24, 1928, on exiling G. O. Mebes to the Urals at the end of the term, on August 31, 1928 he was sent to Sverdlovsk for three years, after which, according to the record of the SC JSPD dated April 13, 1932, he received "minus 12", which included the Ural region, and for the next three years, apparently, he was sent to Ust-Sysolsk, where he died in 1934 (according to the testimony of B. V. Astromov-Kirichenko in 1940). It should be noted that these data have not yet been documented. (Esoteric Masonry in Soviet Russia. Documents of 1923-1941 Publication, introductory articles, comments, index A. L. Nikitina. M., "Minnuvshee", 2005 - P. 154.) 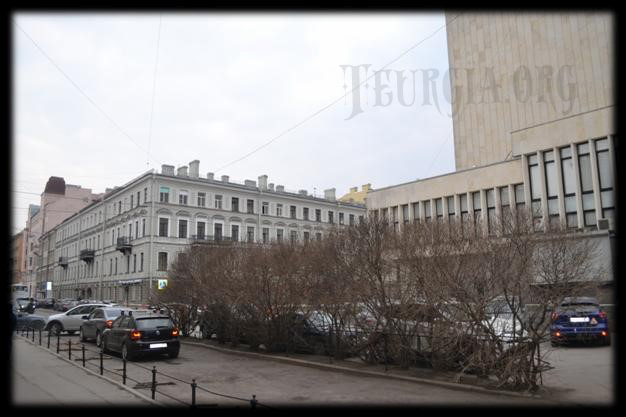 View of the building from Grecheskaya square. Photo: Melius. 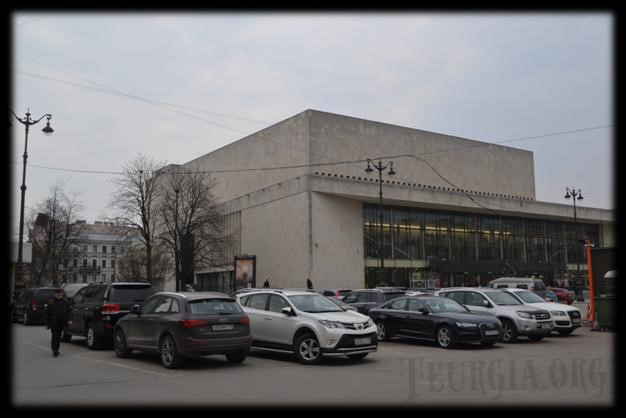 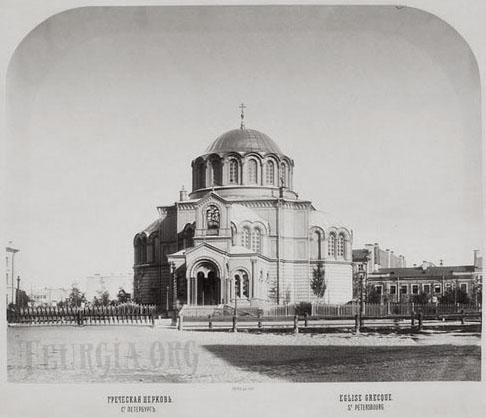 The building is located near the Moscow railway station, immediately behind the "Octyabrsky" Great Concert Hallvii, built on the 50th anniversary of the October Revolution on the site of the demolished Greek Сhurchviii, which gave the same name to the square and the avenue.

“Russian Sofia”, as the church of St. Great Martyr Demetrius of Solunsky was called, built in the Byzantine style, was the only Greek Сhurch in St. Petersburg. During the Great Patriotic War, a German aerial bomb fell into the temple, which, breaking through the main dome, remained lying on the marble floor without exploding. The building was fenced, and in this condition stood until 1962, when it was demolished as "having no artistic value." The 1987 Nobel Prize winner in literature I. Brodsky, as an eyewitness, describes these events in his poem "A Stop in a Desert":

«Now there are so few Greeks in Leningrad, that we demolished the Greek Church, in order to build the Concert Hall. In this architecture, there is something hopeless. On second thought,
a Concert Hall with a thousand-odd places is not so hopeless: it is a temple,
and a temple of art. Who is to blame,
that vocal prowess gives large gainings, than the banners of faith?
The only pity, now afar
we will not see a decent dome, but ugly flat line.
But as for the disgrace of proportions, a man does not depend on them,
but more often he does depend on the proportions of disgrace.

Well I remember, as it was demolished.
It was spring, and at those days
I went to one Tatar family, which lived nearby. Looked out
the window and saw the Greek Church.
It all started with Tatar talks; and then the sounds intervened in the talks, which merges with the speech at first,
but soon, they muffle it.
An excavator drove into the church garden
with a cast-iron weight hanging from the boom. And the walls began to give in quietly.
It is ridiculous not to give in if you are
a wall, and a destroyer is in front of you. 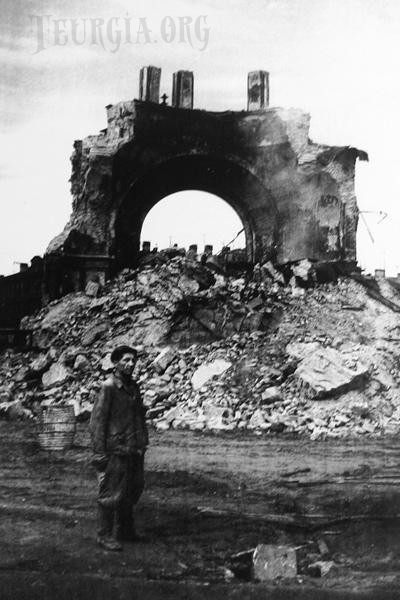 In addition, the excavator could consider it an inanimate object

and, to a certain extent, similar to itself. But in the inanimate world
it is not customary to fight back. Then they drove dump trucks,
bulldozers… And someday, in the late hour, I was sitting on the ruins of the absides.
In the hollows of the altar, night gaped.
And through these hollows in the altar I looked at the running trams, at the string of dim lights.
And that which you will not meet in the church, now I saw through the prism of the church.

Someday, when we will gone, to be exact - after us, something will appear in our place that anyone who knew us will be horrified.
But there will not be too many who knew us.
Like this, out of old habit, dogs in the same place raise their paws. The fence was demolished a long time ago,
but they must be dreaming of the fence. Their dreams cross out reality.
Or maybe the earth keeps that smell:
the asphalt cannot overbear the smell of a dog. They don't need an ugly house like this!
It is a garden for them, they say - a garden. And what is obvious to people
is completely indifferent to dogs.
That's what is called: “dog loyalty.”
And if I happened to speak seriously about the race of generations, then I believe only in this race.
Rather, in those who recognize the smell.

There are so few Greeks in Leningrad today, and in general, there are few Greeks outside Greece.
At least they are few
to preserve the structures of faith. And no one demands from them to believe in what we are building. It
must be one thing to baptize a nation, and to bear a cross is another.
They had one duty. They failed to fulfill it. An unplowed field is overgrown.
"You, sower, keep your plow,
and we will decide when we will sway."
They did not save their plow.

Tonight I look out the window and think about where we went? And from what are we more distant: from Orthodoxy or Hellenism?
What are we close to? What's up ahead? Is another era awaiting us now?
And if so, then what is our common duty? And what should we sacrifice to it?»‎

For those who still considers it is "a garden", I offer a pass to the 3/13 building from the Vosstaniya square. 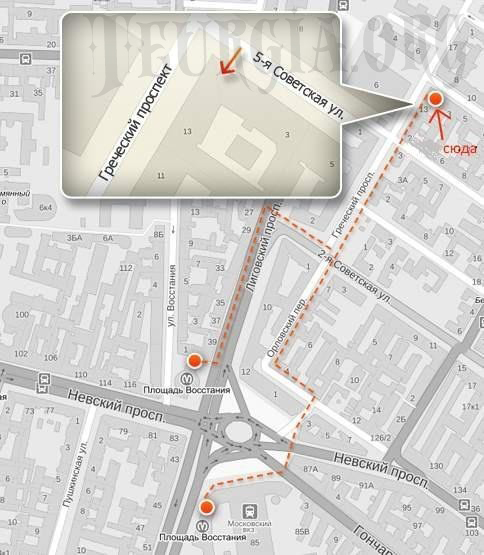