About the temperament of the Moon — Margherita Fiorello
joomlajoomla extension free

About the temperament of the Moon — Margherita Fiorello

About the temperament of the Moon

A friend in a recent thread in Deborah Houlding forum, focused my attention about the quality of the Moon according Ptolemy. In Quadripartite, I, 8 Ptolemy debates about the qualities of the planets in respect of the Sun, and other notes he will add in III, 11.

What does Ptolemy say about the Moon? In effect what he says of the rest of planets: 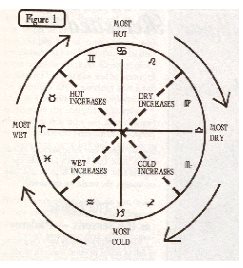 In practice there are two alternative version of the temperament of the Moon.

The first one- the one supported by Greenbaum and Crane – is taken from Galen, De diebus Decretoriis. Says Galen that what is the Sun in the year, is the Moon in the month, so every 7 days of a month is like a season in the year.

"I will make the key of my argument what Hippocrates said., namely that the summer illnesses resolve in the winter, and the wintery illness resolves in the summer.So, know that this is the limit of the crisis of chronic illnesses, as the fourteenth day is the limit of the acute illnesses. For the interval which is in the month from its beginning (i.e. the New Moon) to the Full Moon, which is half of the whole period of the Moon, is analogous to the interval from winter to summer. Moreover, the interval from the Full Moon to the disappearance of the Moon is analogous to the interval from summer to winter. Each of these two times, if it is divided into two equal parts, the part which is in the acute illnesses is a week, and the part in the chronic illnesses is the rising of the great stars and their setting, by which spring, summer, fail, and winter are divided, since these times are not divided into the number of days equally. Not one of the astronomers is content with this, however, (the times) are determined by a distinct change which occurs in the air in another way. III, 7 ((Glen Cooper, Galen’s Critical Days (De diebus decretoriis), ( Ph.D. dissertation, Columbia University, 1999, n.d.).))"

As the year is divided into two halves, winter and spring on one side and summer and autumn on the other, in the same way we will have the same situation for the monthly cycle of the Moon, with the month and year starting with the “winter”: the first half of the Moon cycle from New Moon will correspond to the first half of the year (winter and spring), while the other half of the cycle of the Moon, from Full Moon to the following New Moon will correspond to the second part of the year (summer and autumn). 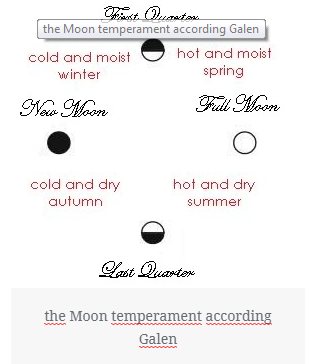 Anyway other astronomers (astrologers) were not satisfied and propose a different model, which it is not explicit in Ptolemy, but present in several comments to the first book of Quadripartite. 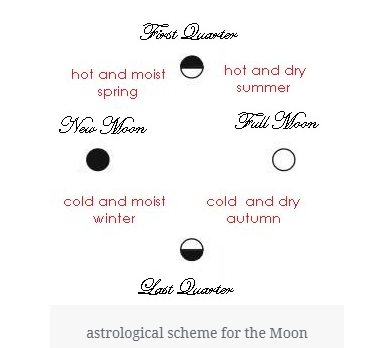 Writes Porphyry in his commentary to Ptolemy written in III century CE:

"The Sun running through the Zodiac in its entirety in a year, the Moon from its growing bright and taking a run, moves in nearly 29 1/2 days….. From its first appearance to the first quarter it is like Spring, and thence down to the Full Moon like Summer, and down to the Second quarter like Autumn, next in order down to its disappearance like Winter. ((Porphyry, Porphyry the Philosopher (cura J.H.Holden) (American Federation of Astrologers, 2010).))"

And the most important Medieval commentator, Haly Ridwan:

"“There are four conditions in the Moon: the first is similar to infancy and spring, the second to youth and summer, the third the mature age and the autumn, the fourth the winter and old age” (( from Giuseppe Bezza’s unpublished Italian translation- Liber quadripartiti Ptholemei, Venetiis, 1493-f.14 ))"

At the end of these short notes, I’d like to mention Antonio Magini (1556-1617). He knows very well Ptolemy (he wrote about Placido’s house system 50 years before Placido) but still mentions the Moon’s temperament as Galen’s one, not Ptolemy.

"In regard to the condition of the Moon with the Sun, they are four, as we mentioned in the comment to the third book of Galen, De diebus decretoriis. The first is the conjunction up to the first square and it is of winter, ie cold and moist; the second, from here to the opposition, is of spring, hot and moist; the third, from the Full Moon to the second square, of summer, hot and dry. The fourth eventually, from here to the New Moon, of autumn, cold and dry. (( Antonio Magini, from Italian translation of De Mutatione Aeris) ))"

For me I prefer the method explained by Porphyry, because to read well Ptolemy it fits better with his spirit. And in fact William Lilly, another careful reader of Ptolemy, mentions this method, not Galen’s one.