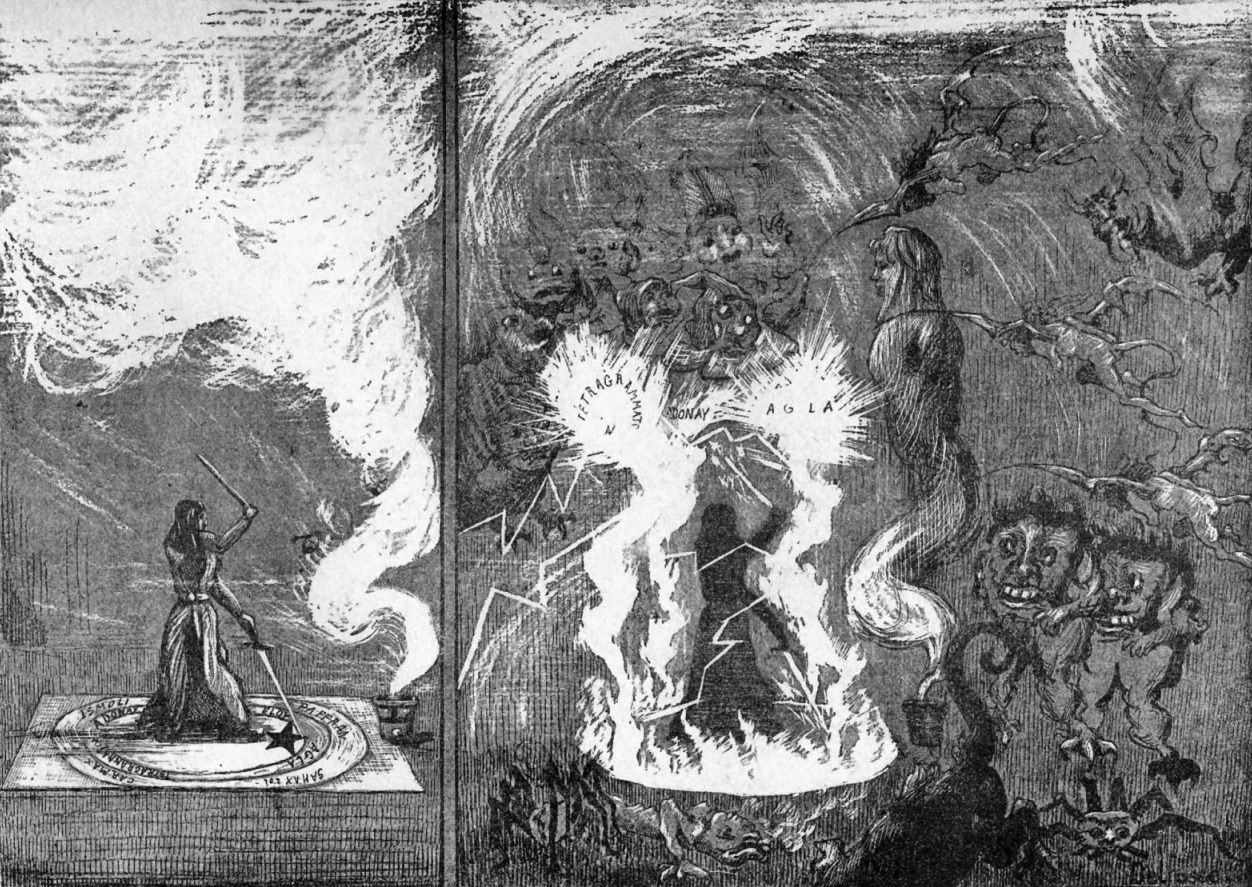 In this article I want to discuss precisely the methods of protection from astral beings, as well as from astral projections of possible detractors.

So, first of all we need to analyze the existing methods of astral attack, and, accordingly, what methods of counteraction in these situations can be applied.

In fact, there are only two methods:

1. Attack of a lower entity sent by a sorcerer.
2. The attack of the sorcerer himself in the astral body.

In fact, to protect against aggressive astral larva, you do not need to have a lot of knowledge and skills. A person can protect himself from astral debris by daily practice of the Lesser Ritual of the Pentagram or the Conjuration of the Four Elements. In fact, the Spell of Four is a much more powerful Theurgic defense technique.

For protection from more complex hostile astral beings, the sanctified Magic Epee, or Magic Sword, is sufficient. However, their role can be played by a special Magic Dagger with a black handle, created specifically for protection from spirits, plotting the Magic Circle, etc. A description of such a Magic Dagger can be found in numerous grimoires.

Attacks of all kinds of demonic forces are prevented by the daily practice of the Spell of Seven, which is nothing more than the expanded formula of Vade Retro Satanas: “ Get away from me, Satan, ” which Jesus uttered during his temptation in the wilderness. This is a preventive measure in exorcism, but, of course, this spell can and should be used in case of an attack as well. In the course of this spell, seven negative planetary influences personified by the names of various kinds of demons, including Moloch, Nahema, Lilith and other forces of the vampiric Qlippoth which have no Light are consequently banished.

When the rulers of certain demonic areas are expelled, then accordingly, all lower spirits subordinate to them are also expelled.

As for the attacks of the sorcerers themselves in the astral body, or through interaction with the Astral Agent with some other living creature that makes the attack, it will be useful to give the most striking examples of these situations:

There are examples of a witchcraft agreement of a silent solidarity between man and animal, the inevitable consequence of which is the occult connection between them.

Such treaties are common among the primitive peoples of Africa, South America and Oceania. Previously, of course, they were distributed much more widely, but even now they are found in some sorcerers’ practice.

The animal with which the sorcerer makes an agreement can be absolutely anything, but the main condition is the establishment of an indissoluble fluid connection with him from childhood. I will not describe here with the help of what disgusting actions the sorcerers achieve this, so as not to embarrass the reader.

So, after the conclusion of such a “contract”, this animal becomes the alter ego for the practitioner, and for the rest of his life, he remains paired with this beast, which protects him, sharing his hectic existence, his successes and failures, his sorrows and joys, and suffering from diseases tormenting him. I will give a description of one such case from the book of Stanislas de Guaita, who terms this kind of pact as “Nagualism”:

“An example which is described by h.f. (holy father) Burgo:

A huge crocodile attacked h.f. Diego, when he was riding a horse along the lake. Having shown enough dexterity and strength to fight back from the crocodile, the priest spurred his horse and, shaking his fettered rod, attacked the monster, stubbornly seeking to drag him to the bottom of the lake. The horse was also kicking and it to a large extent helped the missionary during this unusual duel. Finally, the holy father was able to continue the path, leaving the crocodile to die on the shore.

Upon returning to the center of the Mission, the first news that father Diego was informed was the inexplicable agony of an Indian, with which he had been punished a few days ago with all severity ... As a result of the examination, the Indian revealed all the same wounds which were inflicted on his “Nagual”. This young man died from these wounds - and at that very hour the crocodile died on the shore of the reservoir. (Details of this adventure can be found in chapter LXXI of the "Geographical Description of the Province of Santo Domingo", par le R.P. Burgoa)."

Thus, it should also be noted that such “totemism” is different from the so-called Lycanthropy. A werewolf is just an objectification of the wandering astral body of a sorcerer in a state of catalepsy, while such "totemism" speaks about creatures of a lower nature, connected with the sorcerer by a chain of reflective solidarity.

Regarding the methods of Lycanthropy, it's interesting to mention the case cited in Dr. Papus' book “Magic and Hypnosis”, in the chapter on the description of Astral wounds:

“This case, which seems in many ways strange, I also learned from one of the members of the aforementioned society (Order of the Martinists, added by Bal-Hiram). One farmer had a problem with some animals which were constantly appearing and destroying his flowers and put everything in a mess. He constantly saw a huge but thin cat everywhere, but couldn’t understand how this terrible creature could get here. At the time when he least thought of the cat, it appeared in his room and disappeared behind closed doors and windows.

... after a few interrogations, he told me that one mulatto, a neighbor living nearby, who had his own house, requested the farmer several times to sell his house to him, and after repeated refusals he threatened that he would force him to sell it. Here, as in the old colonies, due to the long-existing slavery, all blacks know a bit of sorcery. I had no doubt that only the desire to get property pushed him to put his magical knowledge into practice. I also knew that among sorcerers, who are so inexorable in their desire to do evil, the astral is unconsciously allocated during sleep by habit.

At a certain moment, when the farmer’s will was sufficiently strengthened, I advised him to go in the evening, if possible later, to the mulatto (who was engaged in petty trading) in order to arouse a strong feeling of hatred in the mulatto before he slept. He followed my advice. The mulatto again persuaded the farmer to sell him his house, and after refusal he again threatened him.

Going to the sorcerer (the mulatto), the farmer fumigated his whole house with incense; and since he was a convinced spiritualist, I advised him to pray to the good spirits. Then according to the plan, at the appearance of the cat he should have immediately taken a wax candle which was lit in advance, and armed with a consecrated stick (with nails, added by Bal-Hiram), force the cat to obey his will, enchanting him with a promise to sell a house in order to lull his caution, and when this was achieved, he must inflict as many blows on the cat as possible without releasing the candle, however, useful only in order to prevent him from striving to beat him too hard, since in great anger he would end up killing the cat . The result met my expectations, the astrosome manifested itself almost unconsciously. Then everything happened, as I indicated.

The next day, my patient, satisfied, came to tell me about this, regretting that it was necessary to hold a candle in his hand, as this prevented him from killing the cat. He still did not know anything about the state of the mulatto. I had hid it from him, that, without any doubt, striking the cat, he strikes the sorcerer.

I assured him that if everything was exactly as I expected, then the mulatto who played this bad game should have been very sick and wounded. He could not believe me. I went with him to the mulatto, to whom he went under the pretext of finding out about the health of his neighbor. We entered the shop. Imagine his surprise when he heard that the mulatto was very sick, badly wounded and shell-shocked. Having wished to see him, we found him bandaged with compresses and in very serious condition. At our appearance, which he did not expect, he trembled and begged to leave him alone, promised not to do more evil. He kept his word, at least regarding the farmer.”

It should be noted that, in the case of using the Sanctified Magic Sword or Epee, the werewolf would have no chance to survive, even if there was a candle in his hands, designed to interfere more than facilitate the operation.

The exact same rule of defense and counteraction should be extended to any other astral attacks, where the astrosome can be more, or, conversely, less strongly coagulated, and, in accordance with this, more clearly and strongly, or less clearly and noticeably, manifest itself on physical plane, or on the astral plane.

Destruction of the attacker's astrosome with a Sword or Epee, or any other isolated sharp iron tip, may be accompanied by a spark phenomenon, which may be followed by smoke. These phenomena will indicate the complete and final disintegration of the fluid coagulum. However, these rules are valid only for densely coagulated astrosomes. For the barely living and almost by physically invisible astral debris, this rule will not work, since there is nothing to decay with sparks and smoke. Usually the destruction of small larvae is accompanied by a feeling of cleanliness both of the operator himself and the room. It is a special purity, somewhat comparable to physical purity, but not limited to physical sensations.

So, coming to a practical recommendation on the implementation and building the simplest protection against all kinds of astral debris, I can only give a recommendation to purchase a sword, epee, or dagger with a black hilt. It is best if the sword, epee, or the mentioned dagger will have an isolated hilt, otherwise you will have to wrap the hilt with silk, since during exorcism operations, the physical body of the operator should not come into contact with any metals under any pretext, including with the so-called "noble" ones. Therefore, rings and other jewelry in preparation for such operations should be removed.

The sword itself, the epee, or dagger can be consecrated by sprinkling with blessed water, fumigation, and prayer. Recommendations for the sanctification of water and incense can be found in the book “A Treatise on Practical Magic” by Dr. Papus, while prayers for the sanctification of the Sword, Epee or Dagger can be used by taking them from ancient grimoires, or limited to the completely accessible and well-known 90th psalm (Living in the help of the Lord ...), the 22nd psalm (the Lord is my Shepherd; I will not need anything ...), or with the prayer “May God rise again and waste His enimies, and let them flee from His face, who hates Him, smoke disappears, let them disappear ... "

The sanctified instrument should be wrapped in white silk, or linen, and kept away from curious eyes.

Translated into English from Russian by © Viktoria Polikarpova & Ankit Sinha, 20.10.2019