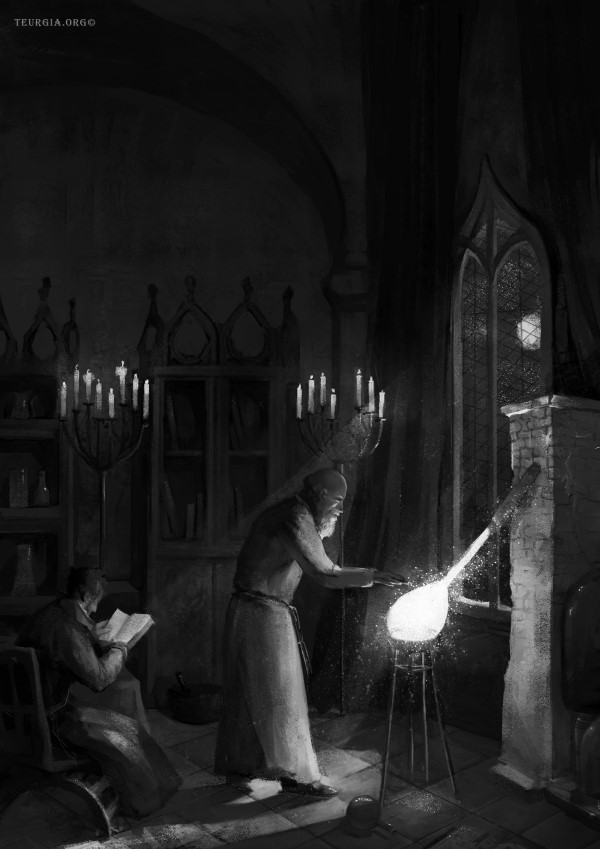 We introduce the Teurgia.Org website update in English. The update illustrates a picture with a scene from the life of an alchemist created by artist HOSKA. The picture in color is available in our gallery.

Now on the portal Teurgia.Org operates an “Support” button on our website.

Rosicrucianism
The Rosicrucians, their Teachings and Tasks — Sergey Protasov
Russian article from the magazine of the beginning of the XX century “Isida” on Rosicrucianism. The article is devoted to the history and important figures of the Rosicrucianism, as well as Rosicrucian principles and goals.

Alchemy - General Information
The Alchemical Door — Margherita Fiorello
Article about Alchemical Door (also called Magical Door) the was the entrance of the Villa built by the Marquis Massimiliano Palombara around 1660. This Alchemical Door is located in the gardens of Piazza Vittorio.

Occult philosophy
Occultism and Mysticism — A.S. Kellat
Report by A.S. Kellat read at the assembly of the Christian Theosophical Society on 21 X 1911 in Smolensk (Russia). This report was published in the Russian-language journal Isis at the beginning of the 20th century.

Mentalism and magnetism
Dr. Baradyuk's Biometer and its Usage — Sar Dinoil
Sar Dinoil, the Russian author of books on occultism and development of hidden astral forces, in his article talks about Dr. Baradyuk's biometer, which was used in the early 20th century by adherents and practitioners of the theory of animal magnetism.